When 'Jack Reacher' became my hero. A reflection on writing to heal (2) 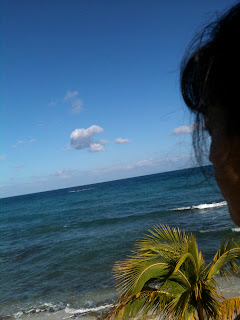 My husband, a writer in his spare time, finds passion in mystery.  I like his refined writing and the meticulous details in his novels.  Yet, I had a feeling of queasiness in my stomach the first time I read a murder scene on his published novel "Confirmation Bias".  Something made me feel uneasy.
I am not into horror scenes, I thought. That explains it! I tried to convince myself.
During a writers conference my husband and I attended last year, we had the pleasure to hear David Morrell’s presentation.  David Morrell  is the award-winning author of First Blood, the novel in which "Rambo" was created.  Mr. Morrell was an excellent speaker, able to motivate the audience, especially when he started to link his writing to his personal experiences.  He spoke the connection between his character (Rambo) and his own life.  I listened without blinking.

“We all are damaged. We write to heal,” were David’s powerful words.
Then, on a review about Mr. Morrell’s work, I found an interesting comment.
“Anyone who studies David’s work will uncover certain themes—the search for father figures and the unveiling of murky pasts, perhaps as a fictionalized way of searching for the truth in David’s own past.” (K.J. Howe)
The writers conference brought me into an interesting reflection where writing began being more than a fun, creative activity, or a profession.  I started to think more seriously about the therapeutic component in writing. Writing as a therapy, not limited to journaling—which is a tool often recommended by psychologists and counselors.  On a much larger spectrum, novels, short stories, poetry, and memoirs can have a significant healing effect on the writer.
I found it interesting that Mr. Morrell made a reference to best-seller, Lee Child, expressing admiration for his work, and especially alluding to “Jack Reacher,” Lee Child’s fictional character starring in his series books.
During an interview with Lee Child regarding the difficulty to write his first book and how long it took him, he said:  “I just played a psychological trick on myself... It took five months and it was really not difficult.  I was in such a sort of burning rage about everything, I was just full of energy and it came quickly.”
Curious about Lee Child’s best-selling thriller series, that’s when I started reading one of his novels during a vacation in Jamaica last year.  Laying on the beach, abandoned to the pleasure of reading, repressing any current worries, I engaged in the plot.  It seemed like a fascinating read from page one.  I was captivated by the story and charmed by Jack Reacher.  But the entertainment suddenly turned into an appalling feeling.  My uneasy feelings of when I read the murder scene of my husband’s novel returned at a twist in the story.

Jack Reacher’s terrifying discovery was that his brother had been murdered.  Jack became outraged, revealing mixed feelings—sadness, guilt and anxious desires of revenge.  I found it a dreadful scene, negatively affecting me as if it was real.  I lacked understanding of what was happening to me.

It's just a novel, a work of fiction, after all. I scowled in disappointment. Why is it causing me emotional pain?

Rather than putting the book down, I took a deep breath and continued reading.  The suspense as to how Jack would look for revenge got me a bit obsessed about the unfolding story.
And clenching my teeth, I hoped the crime would be punished.
I took a break when it was close to lunch time.  I rested the book on my lap, and looked at the horizon with inquisitive mind.  Why was Jack Reacher becoming my hero?
Deeply absorbed in thought, I felt I came now with the right question, and would hopefully arrive at the right answer.
What makes me different from the average Lee Child’s reader?  I asked myself.
Then a vivid image flooded my mind, a horrific one: my cousin’s murder.


**
Update 3/3/12
I was pleasantly surprised to found out that this post has been shared on the Jack Reacher Chronicles Facebook page and Reacher Chronos.

Wow. Is all I can say. You had me hooked with the first installment, and reading this, I was fascinated, but now, I have to continue to the third.

How can one petite social worker who deals with little old people really get to the big emotions. You're a wonder Doris.

I like how you present your stories, Doris. I'm very much looking forward to your next installment...wondering where it will take us.

OMGosh! Your cousin was murdered?! So sorry to hear that. No wonder murder scenes make you uncomfortable. That also explains why you didn't ask the lady about her son's murder. Wow! Waiting for part three.

This series is reading like a novel... and each layer is peels back to reveal something new and truly unexpected... there is nothing in my experience that I can compare to having a loved one taken out of my life as your cousin was in yours...

This is really powerful and thanks for trusting your readers with this knowledge of your life...

Writing is definitely healing to me. Although I don't write fiction (but love reading it!) I do write poetry. When I am struggling with something I long for the moment when I know I can get my feelings and my fears on paper. Somehow the words take it outside of me and make it so that I can see the problem, whatever it is with different eyes.

Hi Doris .. this is just a brilliant expose of how things tie in .. and we don't realise that those dots will join eventually .. instinct - I'm not so sure - everything is meant to be ... including Ms Denniston ..

Dearest Doris,
Writing and reading has such power and at the same time provides great insides!
You word it excellent and as horrific it sounds, I'm looking forward to the sequel.
Love to you
Mariette

That is powerful and a reminder that each reader brings their history to the book written. I bet that is a different experience to read a book that relates close to something that painful in one's past. I know I read books about incest and child abuse with a different edge than some might. Have a blessed day and thanks for sharing this.

I am completely hooked on this. Have to read the final post.

When a crime has personal ties, it loses its entertainment value.
Your discovery of understanding this part of you has me looking forward to part 3.

the other side of me said...

Ah, I like the premise of your blog. I am also doing the A to Z challenge. Alzheimers has been big in my life, and while my father was still alive, I marveled at what he had, and what he didn't have. I even wrote down some of what he said because it seemed magical.