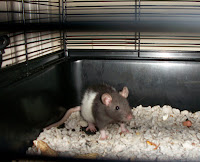 I couldn’t believe it. I stood, motionless. My son, Ernie, came home carrying a cage. Two rats curiously peered at me through the wires. “Are you crazy?”, I yelled. “What? What’s wrong?” -he sarcastically

questioned, knowing what was wrong. “Mom, they make good pets.”

A friend gave Ernie the rats. Ernie mentioned that he observed how his friend enjoyed petting the rats. He admitted that he was initially puzzled. Ernie had played with dogs and cats during his childhood, and so did the rest of the family. But none of us would have ever thought of rats as pets. Quite the opposite, I was raised with the mentality that rats are to be “exterminated.” Rats are “frightening;” “dangerous.” Rats are pests, associated with disease, spending their days roaming in “filth.”

I remember screaming a few times, having seen these rodents. No friend of mine had ever mentioned that rats “would make good pets.” My disgust was obvious and Ernie couldn’t convince me of the

rationale of keeping rats at home and as pets. The longer I stood there with my arms crossed, blocking the rats from my home, I suspected the more Ernie became unsure himself.

Wanting to avoid any further arguments, I turned around and let Ernie take care of his “guests.” The cage was placed outside of Ernie’s room, in the basement living room. A couple of days later, I started nagging Ernie again about the rats. I couldn’t get use to the idea of having rats in our house. I suggested he get rid of them. Ernie, quite defensive, insisted keeping them. I was rather irritated and asked him to keep them in his room then. I didn’t want for any visitors to see those animals. Ernie moved the cage into his room.

A few days later Ernie started to complain about the rats making noise in the night and waking him up several times. They liked to run on the wheel and eat at night. As the rats were now annoying Ernie, he

decided to put the rats’ cage on the patio outside of the backyard basement door. His decision just irritated me even more. I was concerned about what the neighbors would say if they saw the rats. “We are going to get in trouble!”, I stated. “Nah, it will be OK,” Ernie answered, inconsiderate of what I or the neighbors may think.

This was in the summer last year. But now I began to worry abut the rats. The rats seemed fine, after all, aren’t they tough animals? Don’t they thrive in inclement conditions such as in sewers? That was

how I reasoned Ernie’s banishing them to the basement patio in the backyard. I found comfort in my rationale. Or at least I thought.

The next day, when I came home after work, I noticed something was different. The rats’ cage was back into Ernie’s room. Why?, I wondered. “Has he listened to me after all and agreed that it could be a problem with the neighbors?” Ernie was gone. I looked into the cage and to my surprise I noticed that there was only one rat. “What happened to the other?” I was bewildered.

I couldn’t be at peace until Ernie came back home. I immediately inquired about the missing rat. He said one died of heat exhaustion. It was too hot for the rats to be outside, caged. “I killed the rat” was all I could think. I had nagged Ernie so much about those poor animals that I made him make the wrong decision: expose them to deadly heat.

Then the unexpected happened. Ernie pulled a small cage out of his car, containing two young rats. “I felt so bad about the rat, that I went to the pet store and bought a couple more.” I was puzzled. “But Ernie,

why two rats instead of one? Oh my God!” I questioned him, and shook my head. “The two little ones will be more alike. The other one is already a little older.” he logically explained to me. “Oh, I see”, was all I could say.

My feelings of guilt persisted for a few more days. Also, I was certain that Ernie was not going to get rid of the rats. “Maybe rats make good pets,”I thought. I started to watch the rats. I dared to pet them, with

some fear and disgust. “Perhaps this is going to be a good thing for Ernie.” I continued to find reasons to accept the rats. At times, Ernie seemed bored and lonesome. Maybe having pets might be therapeutic for him.” I am a social worker, after all; I should be more sensitive I concluded.

I stopped scolding Ernie, embraced his new rat adventure, and made it my own learning journey as well. I researched caring for rats as pets. I was amazed of the things I learned about these creatures.

They truly make great pets. I learned about their care and behaviors. I shared with Ernie multiple pet rat-related articles and websites.

I started to spend more time petting the rats, providing them with playtime outside of their cage. I progressively overcame my initial fear and disgust of the rats. I started to know each of them, and their

“personalities.” I realized rats are highly intelligent, social, and affectionate. I like that they respond to my voice and movements. I have become very attached to our “ratties,” as I call them. One of the interesting things I learned is that they grind their teeth, producing a grinding sound called bruxing or chattering. This may be a sign of stress, or of relaxation. Our pet rats grind their teeth often when

being petted. I have no doubt they are happy. And we are happy too.

Not only have I experienced the joy of our new pets but I have also learned a great lesson. The rats have made me wonder: How many times have I turned a blind eye to new opportunities and experiences due to my distorted opinions or misleading impressions?

“Why would you want to be a Social Worker?” my high school friend Alex questioned me while shaking his head. "You should choose a more lucrative career."


"Alex, life is not only about money or prestige, but fulfillment" I replied.


It was 1984, our senior year in high school. Alex and I were the top students in our class.  Our friendship developed after realizing that there was no sense in competing against each other. Along with three other students, we formed a great study group, which we called DODALCA. It was an acronym from our names.
Alex and I enrolled at the same university. It was a state university. He aspired to be an engineer. I hadn’t actually planned to enroll in college. I had come to the conclusion that I couldn’t afford it. But something unexpected happened. A coincidence I thought.  A miracle perhaps.
There was a regional contest in which public schools were to select their top students, one per school, to take part in a college examination. I was selected to represent our school. I took the test. I didn’t win the contest, but I scored high enough to be accepted at the state university.
I attended private catholic school from first to tenth grade, and I was quite involved in religious and social activities. I felt great appreciation for the Sisters in our community. I admired their devotion and hard work, but most their compassion and caring for the children, youth, and elderly. They promoted and supported leadership and organization in our community.
“When I grow up I want to be a nun,” I told myself when I was a teenager. I didn’t
become a nun, but their principles and sensitivity in carrying out their duties laid the groundwork for the drive that later inspired me to be a Social Worker.
I lost contact with Alex and the others from the study group. I have heard that Alex is a successful engineer and works for an international company. I was glad to hear that.  As for me, I would choose to be a Social Worker again if I went back in time.
Advocating, educating, promoting, protecting, supporting individuals and communities have been priceless experiences.  While encouraging and promoting self-empowering, I have empowered myself.  As a person and a professional, I feel I have succeeded. I am --and forever be-- proud to be a Social Worker.
Posted by Hold my hand: a social worker's blog at 11:47 PM 1 comment: