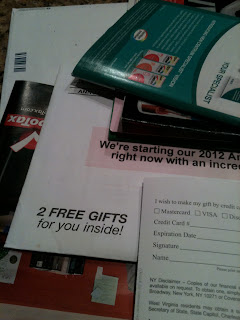 No longer at this address.  Return to sender, I wrote on a large, colorful envelope addressed to Barbara, my friend and ex-resident of the nursing home where I work as the social worker.  Since Barbara moved out of the nursing home, a jewelry company from which she once purchased a pair of earrings and a necklace, kept sending her catalogs and a variety of advertisements in the mail.
Initially, I brought this mail to Barbara, as I often stopped by her apartment to visit her.
“Don’t bother to bring me that company’s mail. Just discard it,” Barbara instructed.
I did, but the mail continued.  I started sending it back,  only to continue coming to the nursing home.
“Barb, what are we going to do with that jewelry company?”  I brought up the subject during one of my visits.  “They are still sending you that junk mail.”
“Oh dear!”  Barbara’s voice sounded exasperated.  “I will call them.”
But the jewelry company’s mail continued being delivered to the nursing home.
“Did the obnoxious mail stop?”  Barbara inquired during a phone conversation.
“I’m afraid not,” I replied, disappointed.  “I guess we just have to continue sending it back.”
Barbara made no further comments about it, and I eventually forgot about the issue.
Months later, as Barbara and I met for breakfast at the retirement community where she lived, I noticed a playful grin on her face.
“I guess I haven’t gotten any more mail from that jewelry company, have I?”  Barbara flashed a crooked smile.
“Hmm.” I frowned, trying to decipher some kind of plot I sensed. “Now that you mention it... No, I haven’t seen any more mail from that company.”
Barbara laughed.
I glared at Barbara, puzzled.  “What did you do to stop it?”
“Well, I called the company and told them I was Barbara’s daughter, and that I wanted to notify them that she had passed away.”  Barbara winked.  “I told them they might want to remove her from their mailing list.”
“Oh my goodness! Seriously?”  I laughed loudly.
“Do you want to know what they said?”  Barbara continued talking, narrowing her eyes.
I nodded, still laughing hysterically.
“That they were very sorry for my loss.”
I laughed until my ribs hurt.
“That’s funny, Barb...” I sipped iced-water, glancing at Barbara’s shiny earrings and necklace over the rim of my glass.  “Very funny!” 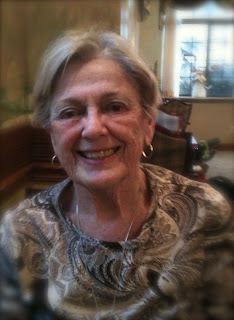 Posted by Hold my hand: a social worker's blog at 5:57 AM

A good problem solver and a good sense of humor - Barbara has some great life skills! As always, thanks for sharing.

She's priceless. Quite a problem solver. I'm going to remember this story. Might even try it on some ads I would like to have stopped!
Ann Best, Author of In the Mirror & Other Memoirs

Most enjoyable to read especially the ending.

Well, I ought to play that trick several times as well as they never ever reacted to things I'd mailed back or cancelled in writing.
It is such a tremendous waste of 'trees'... figuring the total for the entire USA!
Barbara is still a spunky lady; like that of her.
Love to you,

Good for her! Unfortunately, I'm still getting junk mail addressed to my father almost every day of the week, and he's been dead for almost two years now. (I especially like the letters thanking him for "last year's" generous donation.)

I've thought about doing that a few times myself to all the junk mail I receive. They just never give up.

Loved this story...what a smart lady!

Hi Doris .. as the others have said - what a terrible sales organisation .. but Barbara is some lady dealing with it the way she did - what a fun read .. for one of those terribly irritating events - don't we all get them: now I know what to do! Cheers Hilary

That is a sweet story. Since my father has been living in a nursing home I have a whole different perspective of that environment and the people who live there and care for them. Thank you for doing what you do.

what a clever way of getting out of that. I should try that with Victoria Secrets.

What a delightful story, and a truly beautiful woman.

Very funny. Nice way to get rid of them. B