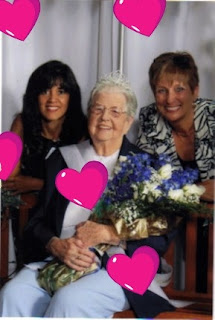 “I don’t have to cook, clean, do laundry, pay bills...” Lucille counted on her fingers the verbs, her lips curving into a mischievous smile.  After a brief pause, she opened her arms and her voice echoed throughout the hall, "I’m living the life of Riley!”
It was no surprise to other residents or to the staff.  “Living the life of Riley” was Lucille’s daily motto.  She was the most confident lady I’d met in a nursing home.  Lucille walked graciously, not without effort to dissimulate her afflicting leg arthritis.  Although the physical therapist had suggested she use a walker, Lucille was determined she didn’t need it.
Lucille went out often, three or four times a week.  Her outing schedule included lunches at the senior center, visits to the local library, and meetings and religious services at her church.  Lucille had friends coming to pick her up, and once a week, she rode a public transportation vehicle for seniors and disabled people.
“She’s a busy woman,” Carolyn, another long-term resident, commented, with a hint of disdain.  It was no secret either that Carolyn was often jealous of Lucille’s social life and popularity.
Carolyn was a fairly wealthy lady, visited by her three children, all highly educated with successful careers.  What Carolyn knew little of was Lucille’s past.
Lucille lived with her son for several years, before she came to the nursing home.  Reportedly, Lucille’s son was an alcoholic who wouldn’t normally sustain a job.  He was essentially living off his mother’s social security.  Lucille took care of their apartment—cleaning, cooking, and doing everything needed for the two to survive.
Lucille’s health deteriorated to the point that she was hospitalized.  Apparently, she wouldn’t initially go to see a doctor.  During her hospitalization, it was discovered that Lucille’s son had been verbally abusive to her.  This abuse emotionally affected her, rendering Lucille intimidated to disclose any information.  Much of the initial information came from neighbors that were interviewed.  Adult Protective Services got involved in the case, and Lucille explained to that she had to be in a place where she could receive the care she needed. That’s when Lucille agreed to come to our nursing home.
It took Lucille some time to adjust to her new living arrangements, and for her health to improve.  She still needed close monitoring with her blood pressure, pain issues and cardiac problems.  By looking at Lucille, not many people would guess she had multiple health challenges.  She often donned nice outfits and jewelry.  She visited the beauty shop once in a while.  Every morning, Lucille volunteered to go to the rehab gym to work out.  She loved the NuStep machine.
Lucille’s son stayed away from her, although it was found out that Lucille sometimes talked with him on the phone, and even mailed to him part of her $30 she received monthly as her Medicaid allowance. Nothing we could do about that—Lucille knew the “Residents Rights” very well, and she loved her son, regardless.
“Our facility has signed up for the nursing home beauty pageant in the state,” the facility’s administrator announced in our morning meeting.  “I’d like everyone to help in the election of our candidate.”
It took a few meetings with residents to discuss and elect candidates.  After a few weeks of debate and work, Carolyn and Lucille were the most optioned residents for the pageant.  After an arduous campaign, Lucille was the chosen candidate.
Lucille was more vibrant than ever!  Although she was normally gleeful, that day, at the Nursing Home Beauty Pageant, she shone like a star.  Prideful and confident, she stood on the stage, answering questions and speaking with eloquent words and witty remarks.
“I’m living the life of Riley!” I heard Lucille exclaim, followed by an avalanche of cheers and claps from the audience.
An elongating suspense waved in the air when it was time for the announcement of the winner.  My heart pounded as Lucille’s name echoed through the speaker:
Lucille was the Beauty Queen!
An euphoric applause filled the auditorium.  My co-workers and I impulsively rose to our feet, frantically jumping and dancing in celebration.  I wiped away tears from my eyes, as it was an emotional moment.  From all the nursing home participants in the state, Lucille was now The Queen. Our queen, beautiful inside and out.  The celebration was extended in the facility and in the local community for several weeks.
The following year, Carolyn was our beauty pageant candidate.  But luck was not on her side.  Beauty radiates from the soul,  I mused.

Posted by Hold my hand: a social worker's blog at 8:16 AM

Yes beauty comes from within. Thanks for a lovely post.

Bless her heart - she sounds like a wonderful woman.

Hi Doris .. beautiful story and she definitely will remain your Queen for many a year to come. How lovely, kind and compassionate she must be ..

Thanks so much for sharing with us .. Hilary

This story is so touching. "Beauty radiates from the soul," and the 'Queen' is quite beautiful.

No queen ever looked more beautiful, or was more deserving of her crown. I love this story!

Hi,Doris,
After so long. Your usual inimitable style !
Looks like you lost weight in that picture.

Wonderfully related to us as usual. Yes beauty does shine from within as you so rightly say.

What a wonderful story and woman. It is nice to see that really nice people really do finish first. Her smile made my day.

Her beauty does truly radiate! That is so very true. It comes from within. Beautiful story!! :):)

it really does, beauty is inside more than outside. It needs no mascara, no make up. It's there.

That is the coolest! So glad she was the Queen!

You put this in writing very well and I wonder often how many women suffer such verbal or physical abuse, in silence... So deserving for her to be the beauty Queen! That will lift her up many times and soften the scars on her soul.
Love to you and wishing you a Happy Valentine's Day!

Wonderful story and so true.

I have met many people both inside senior residences and out who radiate a certain charm, a love of life, a self respect! The shell of their bodies cannot hide that beauty and it is a wonderful thing to behold.

What a great comeback story. Just goes to show that a right attitude can keep us going and overcome many adversities.


Lee
Wrote By Rote
An A to Z Co-host blog
Twitter: @AprilA2Z
#atozchallenge

Your stories always take me back to the wonderful residents I knew:)
Do you mind if I ask you a question? I got word today that my father slipped into a coma,he is in nursing home,dying of kidney failure and I heard they are giving him Oxygen. He is on hospice. I'm not sure if he has a DNR but I was wondering if O2 is for comfort measures. I live in Tx--he is in PA. Thank you!!

I want to say Lucille is beautiful, you write with such warmth and love. I cannot believe a son could treat his Mom this way. My 84 yr. old Mom has dementia and early Alzheimer she presently lives on her own. Yesterday we took her to a day of bowling and social at the nursing home, it was a day program. She remembers it all today names and everything. She was so happy. Four daughters and one son check her constantly and she never has to cook or worry. When we need to move her it will be her choice.If the problem cannot be dealt with at home we hope to have caring people like you looking out for her.
I wish everyone cared for their elderly like people like you. Thank you. Glad I found your blog.B

You can see that beautiful soul shinnin' through her wonderful smile.

God bless ya and have a beautiful day yourself sweetie!!! :o)

Ien in the Kootenays said...

Lucille is an inspiration. Beautiful story! Thank you. :)

That is beautiful, very touching how incredible that she had so much love for such a terrible son, these are painful times we live in, reminds me of how much our lives can hurt our Lord, and yet He loved us that much that our sins cost Him His life on our behalf. So beautiful and tragic, and makes her (and Jesus) all the more beautiful.

Oh! and thank you for visiting and leaving a comment at my blog too :) I'm glad I found your site, it is heartwarming indeed!

You have brilliantly written this poignant essay, I wanted very much to keep reading until the conclusion.
Lucille's attitude made her so beautiful.
Thanks for a truly remarkable post.