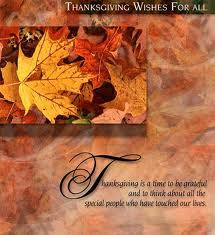 Photo Source
Posted by Hold my hand: a social worker's blog at 6:23 AM

A wonderfully written post, I realise most people in a home think of Thanksgiving and Christmas's past but it's people like you who make it worth living now the present. Thank you.

It's so hard, what you do. I'm sure the resident's families don't understand HALF of it. But you are a Godsend to those people, whether they realize it or not.

Don't know what touched the son's heart, but it sure was timely.
Bless you for the job you do and with the grace you do it.
I hope when I am squirrled away in such a home, someone like you is on staff.

I will never forget the compassion of the nursing home staff when my mom was in her final months. They made such a difference. Thanks for all you do.

Beautifully expressed. Where the health of loved ones is concerned, emotions rule...and it can be , and often is, very stressful. Thank God for dedicated professionals like you...

What a great Thanksgiving post. Maybe timely for a lot of others for reflecting on life's true 'thanksgivings' that often get passed over! Little things and a kind word, a smile or even a nod at times values more than gold...
Love to you and enjoy a happy Thanksgiving week coming up.

I love this post, Doris. I know of the stresses that social workers face, and I'm glad this man saw fit to acknowledge your hard work and compassion. Very poignant, Doris...thank you for sharing.

A kind word goes a long way. Glad you found some thankfulness.

Thank you for a lovely column. I plan on printing this out and sharing it with our Social Services staff. they don't get enough recognition by families and other staff for the amazing work they do.

What a beautiful post! I was guilty of saying that we could always call social services to straighten things out for us... You do have a tough job and that gives your coworkers and clients something to be really thankful for this Thanksgiving-- not everyone could handle a tough job well!

Hi Doris .. wonderfully told tale of woe, hope, and future .. and I'm so pleased of thanks too ..

As you say - just that little 'thank you' can make so much difference .. or apology 'we made a mistake' ..

I hope you can have a lovely Thanksgiving with family and friends - you've done lots for us bloggers too during this year ..

I hope THIS Thanksgiving has been peaceful and quiet. I am sure people don't realize all the stress they put on people who are helping them; they are typically focused on their own stress. God bless you!

My mom is currently in a nursing home for rehab but probably will not come home. And my contact is a social worker. I know the job is hard.

I can really relate to the comments about guilt during the holidays. I have a boat load of guilt I am dragging behind me. The next few weeks will be rough. Many changes for my mom. I so wish her physical condition was better so I could bring her home.

It is a bummer.

The holidays are the toughest time of the year.

nice blog I will be following

As always, a beautifully written story. A job like yours must be so filled with stress, heartbreak, and uplifting moments like you experienced at the end of this story. Thank goodness for people like you with such a capacity for patience.

I hope your Thanksgiving this year was full of blessings.

Hello, I am a Social Work Student in Scotland. I have been recently getting into reading Social Work related blogs and have found yours particularly enjoyable. I hope when I pursue a career in Social Work, I will value the small things that make this job worthwhile. Thanks.

Thank you for the beautiful post. I have just forwarded it to my wife, a social worker. I've said this before, but I'll tell you again. I am very grateful for the help of social workers when my mother was in the nursing home. That was 10 years ago; I hope I remembered to thank them. Have a blessed holiday season.

Oh, Doris, what a wonderful real-life story! There were many days as a teacher, and especially as an assistant principal, that I felt enveloped in stress--being pulled this way and that--but, a simple smile or hug from a child--a teary-eyed thank you from a parent...made it all worthwhile. I can definitely relate to your story. Many blessings!

We all need to remember to express our thanks. I am delighted that once the Mr. Goldman’s family took a step back from their own sadness and stress they could appreciate your efforts on their behalf. Funny how those two simple words can change the feel of a day!

The residents may forget everything else, but they never forget that they want to go home.

If you can take enough deep breaths, the Universe will eventually recognize your suffering and will send you a bit of respite.

Just dropping back in, Doris, to wish you a blessed Advent!

This was a wonderful post, Doris. I work in banking and deal with people all day long. Sometimes they can be difficult to deal with, but I can only imagine how your job is so much harder, because of the nature of your work. And you are right, kindness and a "Thank You" can carry us a long way.
Thank you for sharing your stories. They truly inspire me to be a better person.