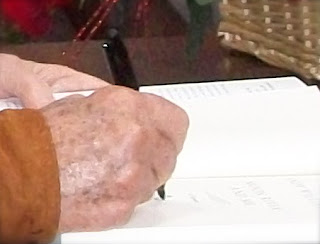 “Is Mr. H coming back to the nursing home?” Nurse Claudia asked, her voice carrying a hint of hopeful anticipation.
“Yes. He needs some therapy,” I replied, handing Claudia a folder with Mr. H’s medical information.
“Is he staying this time?”
“Oh, no!” I shook my head. “He’s just coming for rehab.”
I knew Mr. H very well. Over a year ago he had been discharged to his home, and, despite his multiple health challenges, he managed to continue living independently.
“Ain’t moving to no nursing home,” Mr. H would say.  “Not yet, anyway...,” he'd continue, snickering.
Mr. H had a delightful sense of humor. He was always polite and pleasant, even in his times of discomfort, pain, or shortness of breath.
But one particular fact distinguished Mr. H from the rest of the nursing home residents. He was always reciting poems—his own poems.
Although he had suffered a stroke several years ago, Mr. H’s memory was unaffected and remained sharp. Quite often, while chatting with others, Mr. H was composing poems in his mind. By the end of the conversation, he would surprise people by saying:
“Let me tell you a poem I just made up.”
Then, Mr. H would recite humorous and inspirational poems.
“How do you create your poems so quickly?” I asked him once.
“Don’t know, they just come to my mind.”
“Do you write down every one of your poems?”
“Not always. My hands are getting a bit stiff.”  He raised his right hand, showing it to me. “But I remember every one.”  He tapped his forehead with his index finger.
Mr. H was now in his eighties. He had written poetry for many years. His interest in writing poetry began while working for a newspaper. He was not a journalist or an editor. He was a pressman.
“I have a folder with a lot of my poems,” he explained, proudly. “I also wrote short stories. Maybe I'll tell you the one about a little boy?” His smile sparkled.
“Of course!” I was eager to hear the story—and many more.
Later that day, I returned to Mr. H’s room with a note pad and a pen. I placed them on his bedside table.
"In case you feel like writing.” I glanced at Mr. H and spied a grin on his face.
Mr. H struggled with his physical condition. His sharp and fast thoughts seemed mismatched with his slow and inflexible body. This time, I was concerned whether he would succeed with his physical therapy.
A few days after Mr. H came to the facility I saw him walking the hall, leaning on a walker. A physical therapist followed him with a wheelchair, in case he needed to rest.
Mr. H is a fighter, I mused.
“You are doing good!” I exclaimed as Mr. H caught me staring at him.
“I have something for you,” he said. “Stop by my room later.”
“Sure, I will.”
My curiosity couldn’t wait and as soon as Mr. H was finished with his therapy session I rushed to his room.
He handed me a piece of paper—a sheet from the notepad I gave to him.
I opened my eyes widely.
“A poem!” I exclaimed, grinning.
“My get up and go got up
and flew.
Left me sitting here not
knowing what to do.
Then Edison’s light bulb lit
up my mind.
Saying, get up, go to The Maples
where the people are so kind.
And after they have cared for
you a week or two.
Your get up and go will come
back to you!”
I read it twice. Clearly, a motivational poem. He had found motivation in his poetry—or his motivation shone through his poetry. Either way, I had no doubt that Mr. H was an amazing man.
We graciously displayed his poem on a facility board for many others to read. Mr. H successfully completed his rehabilitation and went back home.
I treasured a copy of Mr. H’s poem. I’ve found myself reading it a few times lately—as my “get up and go” needed recharge. I reflected on the power of creativity and writing. I felt embraced by the soul of the poet. His ageless soul. 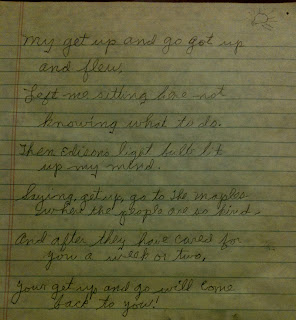 Posted by Hold my hand: a social worker's blog at 8:43 PM

What a nice poem, and a nice compliment to The Maples.

Wow, I didn't know I needed that until I finished reading your post. Thanks for sharing a heartwarming story.

Wonderful man to know. An inspiration

love it, doris!! you needed this this week!

That was a personal compliment and an homage to you for giving him the notepad and a pen! Encouraging to read that one's mind can be that fast and sharp at high age. Hope Mr. H will keep on fighting for a long time. It IS all about attitude in life.
Love to you,

I am richer for having read this post. Thanks for sharing it with us.

What a remarkable inspirational man. What an extraordinary gift to have shared his thoughts and words with you. And how generous of you to have shared them with us. Thank you! Wishing you and yours, Mr. H and all at the nursing home a very happy Samhain/All Hallows Eve.

What a sweet story. Such a great man.

Being a poet I thought this was marvellous, I don't always write mine down but the ones I do I am on my second book.
Thanks for sharing.
Yvonne.

The ageless soul, yes. And the healing power of words.

What a lovely story about a darling man. I admire his mind and desire to share his talents with others. A sweet poem many of us can relate to!

LADY DORIS ~
I'm always amazed by how many inspirational stories you have gathered in the work you do. It's as if it provides you with an inexhaustible supply.

Hi my name is yogesh kumar. I like this blog website. I say thanks to that person who made this
www.today-life-style.blogspot.com

What a beautiful blog! It left me feeling inspired to read about amazing people. Looking forward to following it in the future! :-)

Such a wonderfully warm story. How amazing Mr. H is.
Love Di ♥

That is brilliant and awesome.

We really do get to meet some amazing people in this line of work.

Loved reading your story about this remarkable man! Hope you are doing well and enjoying the fall weather:)

Hi Doris, writing is such a complex task. Hats off to Mr.H. He surely has got wonderful sense of life. Wish I can read all his poems. Perhaps technology will be of great assistance for him, and I think he should start blogging and publish all his poems. I really admire the beautiful, consistent and neat hand writing. Thanks for sharing this wonderful story. Very inspirational.

Movies on my Mind said...

That was a very important post. Thanks for sharing.

Doris,
This post touched my soul, especially after knowing that I had used Mr. H's poem in the paperweights I created for you. I hope Mr. H. loves his paperweight. He is an inspiration to many. You can find a photo of your paperweight in my shop under Prayer Notes Custom section. It's not for sale-just for inspiration. Many blessings!

How wonderful that he found his inspiration.

Hi Doris .. beautiful story .. isn't that wonderful that he could still write AND on the lines!!

That's one thing my mother can't do .. but I'm her Emanuensis .. not a word I'd heard - but how true it is .. her scribe with its trappings!

One day I visited my my mother when she was in the hospital for some treatment .. I heard her reciting "D" words .. she worked her way through the alphabet remembering words - "don't give me short ones: too easy" she would say!

She has now seemed to recover a little bit as she's talking a bit more once again ... the brain is an amazing organ.

Thanks - Doris .. your book interested one of the younger patients who's in for rehabilitation .. she had polio in both legs and has fractured one of them .. she's healing - but it's a long process and she enjoys our chats ...

Cheers and love the work you're doing and sharing with us .. thanks so much .. Hilary

This is a great testimonial to the value of writing and creativity to keep one's mind sharp. It must be so frustrating when the body starts to fail and can't keep up with our thinking.

this simply makes you feel good. thanks.

What gifts these people are to you, and what gifts your stories are to us. Thank you so much for a much needed lift of spirits today.

This is a very inspirational blog!

It's an amazing contribution to us all!

It's a pleasure to surf your blog and to get a better sense of who you are and what your doing!

It's also a pleasure to make your aquaintance!

Will be stopping by often!!