Guest Post: "Through My Caregiver Eyes" by Elaine Shanks 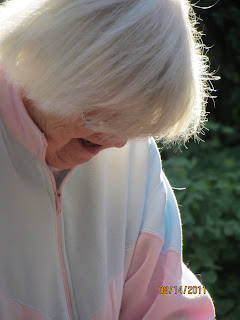 Dearest Doris , thank you for introducing me to Elaine. She is stupendous - I will be her regular visitor. Trust you are doing good.

Hi Doris and Elaine .. I can see some of what you're saying here in my mother before she had her strokes - the difference being the 300 mile distance (long way in the UK).

I'm sure my mother suffered from depression - she became uncertain and dithered, yet was adamant in what she wanted. Funnily enough it still shows through now ...

... fortunately the depression seems to have been curbed by her faith and trust in those around her.

My thoughts are with you Elaine - thanks for sharing ... we all need to read and understand the things that may happen.

Thanks for having this guest post of incredible Elaine! She has an ability to express her innermost thoughts of deep love and respect towards her Mom, in such a wonderful and understanding way! It would be a loss if she had not more exposure so she can instill the same into others...
THANKS A LOT!

Thanks for posting this it was a wonderful read.

Elaine what a beautiful, heartbreaking post. You were correct in saying we all have these situations to deal with but wrong in assuming we need to hear "We are not alone." It is was a pleasure to get to know you.

Doris, I finished your book and just as I thought I loved it! Thank YOU!! My housemate now has it and I heard her chuckling as she started it. :)
Jules @ Trying To Get Over The Rainbow

Elaine, this is an uplifting story on how you came to embrace the roll of caregiver for your mother. Does she have memory loss?
Don't be afraid to ask for help with your mother. You can't do it all.
Carry on, you are a good soul.

This post hit home for me. My mom is going through the same thing with her mother. It's hard to watch those we love wither mentally and physically. I truly appreciate your statement -

"My yardstick in dealing with mom was to treat her as I wanted to be treated when I was her age."

I am lucky to be Elaine's cousin - knowing her makes me a better person.

Thank you all for such wonderful and supportive comments and thoughts. I feel like I just got a collective "arm around my shoulders" from all of you.

And thank you Doris for offering me the opportunity to share this story with your readers. The writing of my experiences continues to help me in ways that I never imagined.

The icing on the cake is hearing from so many wonderful people.

Thank you for hosting Elaine on your blog, Doris. I read these posts on her blog, but she had the comments disabled. Now I can tell her here how much her posts touched my heart. Sometimes we find ourselves in these unexpected situations, and wonder how in the world it happened. But Elaine has been handling the unexpected with both grace and love.

I have been friends with her too and following her story.

Glad to find you!

Thank you Doris and Elaine. This is very touching. I will visit Elaine's blog. Blessings to you both.

I have a gift for you on my blog.

Thanks for sharing. The seemingly infinite doors so many of us open to find ourselves caregivers / carers never cease to amaze me.

What a great post Elaine, very touching, thanks for sharing.

Thank you for the introduction, Doris. Elaine's writing is powerful and evocative - just like yours. I'm off to check out her blog.

bitter sweet story. Beautifully written. It made me think of my mother now in her late 70s and how I see those changes, the same conversation over and over. How I control myself in answering thinking "let her be happy with the way she remembers things even if that is not how it happened"

I wanted a comment by itself to tell you how much I enjoyed your book. Such a clever idea. Beautiful cover, quick stories and beautiful meaning.