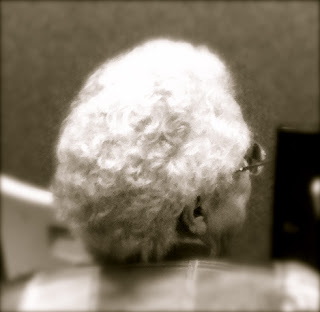 “It’s all over the news!”  Ms. Dempsey exclaimed, cradling her head in her hands with propped elbows resting on the dining room table.  “My daughter is dead!” Ms. Dempsey broke down in tears.
“She refused to eat her breakfast,” Nurse Cecilia said, as I entered the dining room.
“Ms. Dempsey, do you want to drink your orange juice?” I offered, hoping that she would calm down.
“No. I don’t want anything.” Ms. Dempsey saddened voice and tearfulness began to attract the other residents’ attention.
I decided to wheel Ms. Dempsey to her room for more privacy.
“Ms. Dempsey, what’s going on?”
“Don’t you know? It’s all over the news.” She pointed at the television over her dresser. “My daughter Laura is dead!”
The news sent a chill down my spine. It was Monday, usually my busy day to catch up with weekend events which occurred in the nursing home in my absence.
I wondered why no one had mentioned Ms. Dempsey’s daughter’s death? Where is the family?
I told myself to calm down and think rationally.
“Ms. Dempsey, have you talked to anyone in your family?”
“My son was here, but he left.”
The son left? Why would he leave, not telling anyone of the death? I was certainly confused.
“My daughter has had problems with her husband,” Ms. Dempsey began. “They argue all the time, and her heart was too weak. I think she...“ Ms. Dempsey’s words trailed and she gasped for air.  She started sobbing inconsolably. I hugged her, feeling with my lack of information to relate to her seeming despairing situation.
I attempted to ask further questions, but Ms. Dempsey didn’t seem to listen.  She continued narrating family events involving conflicts and her belief she made erroneous decisions in response to these particular situations.
I listened for about half an hour.  My quiet listening seemed to help tranquilize her, at least for those moments. Then she buried her face in her hands again and started to cry.
“Ms. Dempsey, I am going to call your family,” I said.
“I don’t think it will do any good,” she said, continuing to sob.
Nurse Cecilia came in with a box of Kleenex and a glass of water for Ms. Dempsey. Taking  them, she gently dried her eyes, and then took a generous sip of water. She seemed somewhat comforted.
While Nurse Cecilia assisted Ms. Dempsey, I rushed to the nurse’s station and looked up the emergency contact information in Ms. Dempsey chart. I reached for a cordless phone and rushed back to her room.
I punched in Laura’s phone number, wondering if the daughter she believed to be dead would answer.  My heart pounded.
The phone rang three times, but to me felt as though it were forty.
“Hello?” A woman answered.
“Laura?”  I forgot all etiquette for business phone calls, failing to identify myself, the company, and the reason for the urgency of my call. It was as if my instincts had taken control over all my rationality.  I just wanted to hear Ms. Dempsey’s daughter’s voice, and to know that nothing had happened to her.
“Yes?”
That “yes” sounded magical to me. Like a miracle had occurred. The feeling of relief embraced me.
“Laura, this is Doris, social worker. I’m here with your mom, and she would like to talk with you.”
“Oh, sure!”
Ms. Dempsey’s eyes opened widely.  She looked puzzled. Then she sighed and tilted her head up, flashing a half smile.
“Laura is okay!” Ms. Dempsey exclaimed, in a whisper.
“Yes, she is okay,” I said as I handed her the phone receiver.
Ms. Dempsey clasped the phone to her ear.  She cleared her throat, and with serene voice, she said, “Laura? Honey, I had a bad dream...”
Posted by Hold my hand: a social worker's blog at 6:50 AM

Oh the poor thing! How cruel dreams can be.

Living with my own sometimes confused elderly mother I can relate. And it is sad, especially when you have known this person at a younger age.

I am sometimes drawn to tears at what has been lost with my mom.

Your blog is a comfort to me. Makes me realize that this time isn't about loss but just another stage of life.

Oh...how heart-breaking that must have been for her...

Their dreams are so real to them and I forget this sometimes. Have a great holiday weekend Doris.
Jules @ Trying To Get Over The Rainbow

Her dream was so real, thank goodness it was not true

That is a mothers love. Even in a nightmare they don't want their kids to be hurt. The fear of a nightmare turning into reality blurred her thinking vision. Thanks for sharing this touching incident.

I'm so glad it was 'only' a dream, but how terribly sad for her.

Hope you have a great weekend!

The boundaries between dreams and reality seem to become increasingly blurred with age, don't they. Some people seem to live in a continuous bad dream. It must be terrible.

You have the right instincts, Doris; that's what has made you suspect Ms. Dempsey is probably confusing dream with reality.
Very well-written piece!

Well written post! Thanks for sharing! Glad all was well!

That was quite a scare!

Oh, my. I was wondering if it was a Dementia thing, or a similar name of a woman who did die, or what. A nightmare that seemed so real. Terrifying.

I'm glad it was not true for her.

That poor dear lady. How wonderful that a simple phone call could clarify things for her and give her relief from despair.

Her bad dream indeed became a Monday Nightmare for many around her! But you resolved it in a perfect way and do't fret over forgetting for a split second about the business phone ettiquette. Probably Laura didn't even notice and she certainly forgot after hearing her mother's dream...

PS Do you know how to save your precious blog? See my posting of today...

Your posts never leave me with out some strong emotion. Well written and you took me right along. So glad you made the extra effort to ease that poor woman's mind---and mine too.

doris, you were meant to be in that job, really...i just hope that there will be somebody like you at every nursing home someday!

You are a wonderful friend.

Dear Dora,
You will be rewarded for your work.We can work in many ways..But what you do is not simple work.You do it as a mission.

Wow! You are great at writing these short stories!! I feel really bad for that patient. Dementia runs in my family, so I have personal experience with this issue.

I love your blog Doris.
You truly have a talent for telling the story of other people's experiences in this journey of life.
I can relate to the realness of dreams and the effect that they can have on you. When I was in a nursing home I was having scary dreams for several months. The dreams were so scary and realistic that I was afraid to even go to sleep at night. I'd stay awake for up to two days at a time before finally giving up and falling asleep.
I do believe that a person's age, mental stability and their health issues, such as dementia for example, can play a major part in the realism of the dreams we may have. I also know that there are other reasons behind them at times. I found out that the bad dreams that I was fearing so much were caused by certain medications that were being administered to me. My dreams turned out to be a side effect of a medication and nothing more.
So while the circumstances may sometimes be more severe, turning out to be a permanent case, resulting from age or mental stability, it could also be as minor as a simple side effect of a medication that needs adjusting or that you need to be taken off of in general.

What a sad story...and so typical of the elderly who do not have all of their "faculties." Being a social worker to them, (as I am also) is full of challenges, but we can learn a lot from their experience.

How sad that she was so confused and thought that her daughter was dead. That would bring tears to your eyes to think one of your children went before you. Thankfully, you were a blessing to her to get her daughter on the phone.

Oh Doris, I felt so bad for her! Thankfully she had you to call her daughter. Bad dreams can seem so real.
Andie

A powerful story about that fine line between one world and the next. What amazing stories you experience in your work!

Dreams .. and Monday nightmare for you .. good take on a sad story .. thank goodness all was well .. Hilary

Oh, I'm so glad she wasn't really deceased. Praise God! The poor woman. I love stopping by and reading your stories. Hope you are doing well!

Reading this post my third time? It reminded me when I was poorly in hospital for nearly 9 weeks, my daughter only 8 then... hubby told me: "She is crying and worry, she will be on her own one day." not sure what she mean... hubby didn't give me more details, I feel sad and guilty, she only 8 and think mummy ill and she will be all on her own oneday, why she think that? She still got daddy and G-dad, she is our only child... Like your writing, can feel your gentle and calm...

God, but don't wish that all of your patient's problems were so easily solved?!