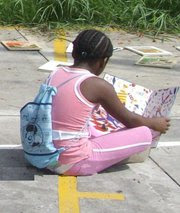 
Nook, Nookcolor, Kindle, iPad, MP3, iPod, ...“I think I want to upgrade from my iPod,”  Claire expressed. “I want an iPod touch!”
It wasn’t an easy decision for Claire.  My teenage daughter debated which of the electronic upgrades would best suit her dream birthday gift.
Claire and I spent a great deal of time looking, touching, and testing e-readers, tablets, and music players.  The gadgets were fascinating, I have to admit.
That weekend, I had observed Claire intently playing with her iPod and Smart phone, as I surfed the internet, caught up reviewing blog posts, replied to emails, and read the news on my laptop.  I read the national and international news, including online news from my hometown—Cali, Colombia.
As I read El Pais, the most popular newspaper in Cali, one particular article caught my attention.
Biblioghetto, Literature in the middle of poverty in barrio Petecuy. *
It was the story of a young writer who decided to devote his time and heart to teach reading and writing  to children and youngsters in an impoverished neighborhood—or barrio—in Cali.  It was the brainchild of Gustavo Andrés Gutiérrez, a 25-year old native of the same neighborhood.
Gustavo passionately read books since an early age.  He was so fascinated with reading, that he easily devoured four books a week.  Later, he ventured into writing himself and became a novelist.
The article related how Gustavo, after a river flooded the neighborhood, asked himself:  “What’s my social responsibility as a writer? ‘To introduce children to literature,’ I answered to myself.  And that’s what I’ve done.”
Petecuy, along with other neighborhoods on the outskirts of the city, have gained a reputation of barrios with high rates of illiteracy among children and youngsters, along with their more dark reputation of rampant crime, drug problems and gang-related violence.
“The only way to keep away from violence in the neighborhood is to feel passion for something.  Books have been my passion, since I was a kid,”  Gustavo said.  And his dream of drawing children and books closer together was possible when his concept of Biblioguetto emerged.
Biblioghetto is a mobile library project.  Every weekend, Gustavo and a group of friends dedicated to his vision, sit at the park, street corners and by the river dam, to delight children and teenagers with readings from books and drawing pictures.
The project also includes workshops in reading and writing, story-telling, theater, drafting community newsletters, and organizing art festivals.
Some of the young participants declared that Biblioghetto helped take them away from illegal drugs and gang activities.  And more amazingly, it has been reported that rival gangs have met at the barrio festivals without any confrontation or violence, and interacted in a friendly manner.
As I finished reading the article, my heart pounded.  I fell into reflection.  I thought about the visit to the electronics store and the multiple choices Claire had before her.  Then my thoughts switched to the children and youngsters in Petecuy, and many other parts of the third world that don’t have access to the most basic form of mass communication: the written word.
Anxious to express my admiration for his impressive project, I contacted Gustavo.  He kindly replied to me, giving me consent to post the story about Biblioghetto, and to make his information available to anyone who may want to contact him.  His campaign is for a donation of notepads, books, pens and pencils.
In an era where electronic communication is the norm, a voice asking for the basics of pen and paper to open the world for illiterate children and teenagers becomes a call awakening me.
Gustavo concluded:  “We want to promote our project and find national and international support. Thanks for your encouragement.”
Gustavo Gutiérrez
Biblioghetto Director
Email:   guanguto@hotmail.com
http://www.facebook.com/Biblioghetto
www.biblioghetto.blogspot.com
The reporter of the story ended the article with the most mesmerizing thought:
“Gustavo doesn’t know, but he has an unsuspected power.  He changes people’s looks in Petecuy.  He, the writer, who uses literature on the streets and parks, has de-activated people’s rage.”
* http://www.elpais.com.co/elpais/cali/noticias/gustavo-cambia-miradas 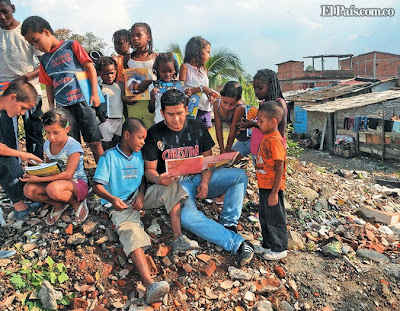 Wow, we simply do not think about such things going on and the fact that people cannot read in this day and age. But it is happening all over the world. We are so blessed and don't even realize it at times. Thank you for sharing that.

This is a subject to my heart! Writing and Reading (yes, with capital letters!) are THE most important things in life. It will set you apart for the rest of your life and it opens many windows in life... an outlook on the world.
Thanks for sharing this and for supporting Gustavo!

Have a well deserved great Sunday and belated happy birthday to your lucky daughter!

Hi Doris .. that has lightened my heart - amazing how such wonderful people are always there ..

Gustavo deserves all the credit and support he can get .. what a brilliant story ..

We do forget how lucky we are .. I hope Claire is enjoying her new techie magical toy .. Hilary

What a wonderful project. More people like Gustavo are needed in this world.

Gustavo does have a power that even he may not realize. I would like to forward the address that you mentioned to Dutchess County Literacy Volunteers Association to see what they can do to help Gustavo. Thanks for sharing.

thank you for reading my blog.

Gustavo reminds me of a lady in our neighborhood, both her legs disabled, she used to crawl everywhere she went, until after a long time she got a wheel chair. Like Gustavo, passion set her life stream. She took masters in Malayalam (which is the local language here) and headed to the impoverished villages to literate the masses. She's still driving on on her wheel chair teaching the poor. She went out to literate the old and adult i suppose who had lacked education in their childhood.

Her name is Thahira, but i fail to see anything about her on google.

Anyway, thanks for sharing the story. It was inspiring

Gustavo is a hero. I applaud his work.There are many such heroes in my country (India) and they are making a difference in the world

What a tremendously inspiring and laudable true story! Wow - it motivates me to do something similar.

Thank you for sharing this, and I doff my hat to Gustavo - you are indeed The Old Silly's hero, dude!

Only those who have learned the power of sincere and selfless contribution experience life's deepest joy: true fulfillment.

"If something comes to life in others because of you, then you have made an approach to immortality."

Great opportunities to help others seldom come, but small ones surround us daily. We,the ordinary, can remember that !

These are not ordinary people.They live in the true spirit, and whether they believe or not,they are closer to God.

He has the power to de-activate rage. That is amazing. Knowledge is power. Words are a gift. Write on, Doris!

Lovely! I love reading about situations like this. They also make me want to pay it forward, some how..

What an inspirational story! I like the way you tied it to your daughter's many choices of ways to access the written word.

This is lovely! Books can change our world but all children as you say do not have access to books. Many NGOs working with children in India have been trying to introduce books to children and set up libraries for them. It works sometimes and often does not- the TV intrusion into the lives of children has been a big challenge. But access to books alone is not the answer- what we need to do as NGO workers is create that interest through book clubs and discussion groups so that kids would read books and want to talk about them. I can see what books can do for kids- my own daughter is a complete "book worm" . She reads so much that her school librarian has now turned her into a book reviewer.