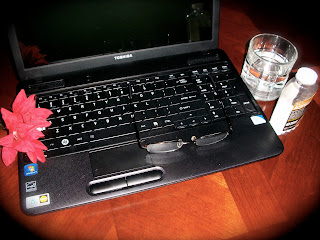 A sweet story. It's nice that the Internet crosses generations.

I don't know.
Most people have lived their lives. They have family and memories and personally, though I would enjoy having friends, I do not think I'd get into marrying someone again.
Like the story said, both had health issues to resolve, neither could take care of the other.
I believe in family and that old people should die at home with people who love them. I think day camps, where old people can be picked up and taken on picnics or some other activity with others, is a good idea.It's better than a home where family never visits and then you have to marry and both old people stay under duress till it's finally over.

Your story brought tears to my eyes Doris. I guess that you showed us what the expression, 'love is blind' really means. What a tender couple...you just never know where love can be hiding.
Andie

There is no age, no time limit for true love... It cannot be pushed, not bought and not be lost. This is great for the duration of their lives; it will help both of them. Life is not perfect but if someone is there to love you when you need them most; that is a blessing from heaven!
May we all learn from these great examples and yes, the world has become bigger with our cyber communications.

Lots of love and above all a Happy Valentine's Day!

This blog very pleased me, I am an academician of Education who has shared with the virtuality of my media works? as professor of theology. Sharing also try to present texts aiming to expand my knowledge as I did while reading your blog now, I grew up in many areas.
www.vivendoteologia.blogspot.com

Mariette's comment is exactly what I think about Love and Life.

Such a beautiful story of two loving people despite their health problems and old age fears! Kudos to you Doris for the writing and sharing!

I think Virginia was with-holding both her fears and her true health problems. Was their relationship really deep enough to share their truth and their pain?

You can "fall in love" and "love" someone at any age; but the older one gets, the more hurdles there are. This is such a touching story; it seemed to have worked out well for these two people, despite the problems. And, as usual, you have told it beautifully!

I just read your comment on my blog, Doris. Jen says thanks for your get-well prayers, and she hugs you back!!! She's feeling somewhat better today, and we're having a good, peaceful Sunday.

HI Doris...this story reminds me we all want to be loved no matter what the age and we don't want to be alone. And I think you're an awesome social worker...you really care. Wishing you a Happy Valentines Day tomorrow. ☺

Doris, Thank you for signing on as a follower on my blog, Write from
the Heart. WELCOME!
This story could have been about my mom and dad. No matter how she fussed at him, he proteced her fiercely if anyone said something to her about how she spoke to him. Your blog is meaningful.
http://lindaoconnell.blogspot.com/

Relationships are often difficult enough when we're young. So many more factors can be entered into the equation after we are older and more set in our ways. Patience and forgiveness are so important.

When we are in the closing days of our lives it doesn't mean we ever have just give up and give in to our future passing. We still have time to live as long as we are alive and are willing to try.

This was a hopeful story.

This was a lovely story. I was a bit taken back by how Virginia was so blunt with her husband when she proclaimed at that meeting that he has dementia, but I detect an underlying reason for it. Perhaps she is afraid of the outcome of his prognosis, or perhaps her own medical situation has her on edge and full of anxiety. All in all you were able to clearly relate the love that they share and also the patience and acceptance that is a vital factor in their lives and shared love. It was very well written and a pleasure to read. I am not a social worker by vocation, but by heart. I'm grateful that our paths have crossed.

I have a very dear friend who was widowed and she had never thought that love would ever come her way again. I spoke with her just the other day. She shared how she and her newfound love and husband now of five years cherish each and every day that the Lord allows them to enjoy with one another. She reminded me that she is almost eighty, and her sweetheart that she loves more than life itself, he's going on eighty-five! I've been needing to update my writing blog. I'll post their love story on it. It's called, Manifold Blessings: A Christian Fable

am grateful for their access and to be following me, their participation? It on my blog? a satisfactory? it, then? s a great intellectual and professional competence, and I'm just a student who wants to grow a lot, and has the support for this all I want to help achieved? air this ideal.
www.vivendoteologia.blogspot.com

A portrait of patient love...this is an admirable story. Thanks so much for sharing. At times the best thing we can do when a loved one is frustrated is to remain calm (without, of course, allowing them to walk over us). You always portray the people you write about with such stunning, empathetic realism.

I can see the pain they both are going through. When the nursing home wanted to release my father, my mother refused because she felt she couldn't care for him--she actually moved out of their home and he came home alone. But she loves him dearly and visited him all the time, making him meals etc but she knew her poor health couldn't care for him.

Aww, what a lovely story!

A lovely story! Just tells you that love is not about youth and beauty- it is also about companionship. It is amazing, how many different ways love can touch us.. I also like the way you have brought out the fact that when we make a second choice of a partner in life we are in no way betraying the first..

From an ordinary perspective, the old lady's outburst would be shocking enough to make someone turn away from the situation, perhaps with feelings of disgust, loathing, maybe even fear. From your perspective, it was a chance to witness the dynamic aspect of a loving relationship still in the beginning stages with not much time to work out the rough spots. From a writer's perspective, though, what a rich story to watch unfold.

Thanks for stopping by my site and signing up as a follower. I'm almost up to that magic 100! I hope you'll visit again.

Their love story reminded me of how my husband and I met. What a gift love is later in life.

We only shared 3 1/2 years of marriage before he died of leukemia, but I wouldn't trade them for the world.

Hi Doris .. what an amazing tale - the hope for love, and love of love, while the ongoing difficulties of life continue .. poor woman would be terrified .. but I'm so pleased the love is there.

Sweet touchin' story that goes to show ya...you can find love at any age!

God bless ya and have an amazin' day sweetie!!!

It is hard not to cry when you hear a story like this. Love can make such a difference in how your life is lived out. Thanks for sharing that.

Thank goodness for you and all the other social workers. It has to be one of the toughest job. Just to be able to remain human, and be strong among all the heartbreak.