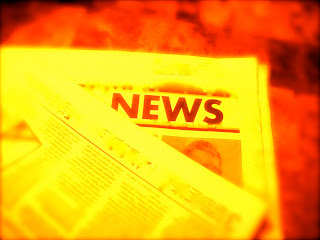 “A reporter from the local newspaper is here to see Ms. Hicks,”  the receptionist announced.
“What newspaper? Why?”  I inquired, unsure why Ms. Hicks would be having that type of visitor.
Ms. Hicks was a fairly new resident in the nursing home.  She was one of the most social and fun ladies in the facility.  Her sense of humor and witty conversations delighted every one that spent time with her.
“The reporter said that he had arranged the interview with Ms. Hicks' daughter,  who he says is on her way here.”
I rushed to the lobby to meet the reporter.  He explained that he was assigned to write an article about “The Convent,” a historical building in town that had recently been refurbished and converted into a convention center.
The Convent had served as an orphanage in the 1930’s during the Great Depression.  Many parents abandoned their children due to their poverty.  Jobless parents with children starving, and worse, with no home.
The newspaper had tracked down Ms. Hicks as one of The Convent alumni graduates.
“Ms. Hicks is some sort of celebrity,”  some of the other residents gossiped.
She truly was a celebrity.
A few days later, Ms. Hicks interview and photos were published in the newspaper.  The article became the talk of the residents and staff, and Ms. Hicks became even more popular than she was before.
One day I noticed that Ms. Hicks seemed quiet and reclusive.  I decided to check if everything was okay.
“May I visit with you, Ms. Hicks,” I asked as I entered her room.  She motioned for me to come in.
“I am impressed about your experience at The Convent,”  I said.  “I know you already gave a great deal of details about what it was like living in there,  but tell me, what do you think about having that experience?
Ms. Hicks began telling me about how her father died at age 40, in a car accident, and how her mother had to take care of her seven children.  Not having a home to raise them, a menial job, and little education, she had no option other than to take her children to The Convent. Four boys and three girls.  Mrs. Hicks mentioned that the boys and girls lived in total separated quarters, and never met.
“I had the chance to be with my sisters.  I was the youngest one. We had as much fun as we could, but it was hard times.  Especially when my older sisters reached the age they had to leave The Convent.”
Ms. Hicks never saw her brothers from the time she entered The Convent until she was 16 and left the institution. Then she and her siblings reunited.
“It was one of the happiest days in my life,” she said.  Her eyes became teary.
“And what about your mother?  Did you ever see her?” I asked.
“She visited us once a year.”
“Once a year?”
“She lived 180 miles away, and she didn’t have the money or the transportation to come and see us more often.”
Ms. Hicks told me that her mother had to go and live with other relatives in order to survive.
“We all survived. We got a good education at The Convent.  We worked hard, and learned work ethics.  We grew up with Christian principles,” she proudly expressed.
Ms. Hicks had a successful career in the business field. She had a happy marriage, and was proud of her well-educated and loving children.
Ms Hicks had recently become a widow, but managed  to live independently afterward.  She was at the nursing home for rehabilitation after falling and sustaining a hip fracture.  Her determination and will power were exceptional despite her 83 years of age.
“One thing I don’t understand,” she said, with soft voice. “All my siblings are deceased.  I am the last one. The only one alive.  Why am I the one to live this long?”
“There must be a reason, Ms. Hicks. You probably have the answer, if you think about it,” I said. “Maybe you’re here to inspire all of us and share your story.  I am sure the newspaper story touched  many other people.  You are an example for others to follow. You are the most courageous and tenacious person I’ve recently met.”
A high pitched voice interrupted our conversation.  “Grandma!” Ms. Hicks’ great-grandson jumped on her lap and hugged her.
I heard the steps of other people approaching the room door.
Ms. Hicks glanced at me, with a big smile.
“I think I just found the answer!” she said, as she embraced her great-grandson.
Posted by Hold my hand: a social worker's blog at 6:47 AM

Aw, that story made me tear up - what a terrible thing for a child to go through and what a positive attitude she had about it as a woman! Very nicely told, too - thanks for sharing!

A lovely sory that reminds us how tough things were a mere 70 years ago. It might help us stop complaining!! Thanks for sharing.
P

What an inspiring and touching story. Thank you for sharing. Blessings.

Just imagine for having to raise SEVEN children on your own at that time of depression...
There are remarkable women in this world, that stand out far more than any so-called Hollywood celebrity who are very rarely passing on a meaningful message to our children!
How cruel for the heart of this mother it must have been for not being able to visit more than once a year with her children!
Glad that this lady at least has a caring family of her own and that she's bright enough for sharing such a high moral story in today's time of loneliness and seemingly 'rudderless' destination of so many.
Thanks for sharing this!

What a great story! Isn't it nice to learn about people that after a time of difficulty, they prevail? It takes a lot of heart and love and will to overcome the huge stones life puts on our path. Good for Ms. Hicks! What a great lady.
How much I would love to visit and just chat away with the residents. I am a good listener (they say) and simply love to pay attention and learn about them.
have a great day!

Oh my goodness this just gave me chills. What an inspiration and beautiful woman.

oh, doris, this is an exceptional story! it was really good, all the way through, but the line concerning the grandson got the tears going!

Everyone has a story to tell and you've told Ms. Hick's story very well. Very touching!

Your story of Ms. Hicks reminded me of my Aunt who died a week ago. She was the last living sibling of my grandmother's family. When my mother called me to inform me that my aunt died, I was saddened, but then I realized that she was once again reunited with my grandmother and her other brothers and sisters. This thought gave me much comfort.

Your post about Ms. Hicks tells me that we all have a purpose for being here.

As always, Doris, what a beautiful story. Love those kind of surprise endings!!! I too believe there are reasons why some people stay when they feel like they have nothing left to contribute and want to leave.

Have a wonderful weekend.
Your friend,
Ann

awww!!! what a wonderful story! my mom was born in 1930, right at the start of the great depression. her family had it pretty hard. she was the baby of the family. i recall her telling me how difficult it was for them back then. her parents struggled to feed 5 girls, and 2 boys. so yes, it was a difficult time indeed. it makes you really appreciative of all the conveniences we take for granted these days! superb post!

Really loved this one, Doris!

*sniff* What a wonderful story. And I wonder if stories like these are why you are where you are.

I work in daycare and there are so many parallels with the very young and the elderly. They cause us to see and feel so many opposing things at once-joy and sadness, concern and amusement, laughter and tears, independence and reliance....

Have you ever written a fictionalized memoir of some of your experiences there?

A beautiful story, well written... but the details are quite sad. Can't imagine never seeing my brothers, or even seeing my mother only once a year... or being the one to outlive all my siblings in my old age...

And yet you are so right, Doris, there is a reason for her life story - that she may live to tell it, and share it with all of us, and I am sure her grandchildren and the generations to come have all been impacted by that story.

good for me to read this today. Thanks

This is such a touching story to read! How wonderful that someone who was in such a tough environment grew up to be such a loving & optimistic person. :)

Just swinging on by again to take a re-read. Blessings.

what a story. It made me smile, thank you.
loking forward to reading more of your essays

A standing ovation for Mrs Hicks an d your story. Strong inspiration

Fact is, truly, more amazing than fiction. Stories of this sort call us to higher ground, and inspire us to live more noble lives.

What a thought-provoking story. I'm sure the decision her mother made was the hardest of her life. She was probably so thankful, though, that she had the option available to her. Still, such a sacrifice. God Bless Mrs. Hicks.

Thank you for sharing that amazing story. How sad for her mother to leave her babies to the care of nuns and barely ever see them. How amazing that they survived it, and that she has a positive outlook on life. How blessed is the love they experienced.