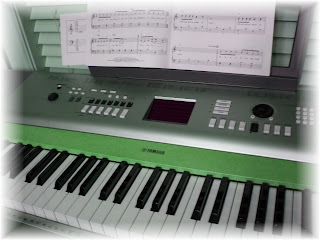 “What are you listening to?” my co-worker, Jane, asked, as she walked into my office.
“It’s Andrea Bocelli,” I replied.  “I work better with music in the background.”
“Music has magic.  Have you noticed how much the residents enjoy the music in the dining room?”
“Music can be very powerful.”  I said, sighing.  Talking about music brought special memories to my mind of a few nursing home residents.
Dorothy was one of those special memories.  She was a sweet lady, but rather quiet.  She normally immersed herself in observing what was going on around her, but wouldn’t say much.  Her main interest was being outdoor, on the gazebo, looking at the Ozark’s hills.  In the winter, she changed her preferred view to the lake.  Winter was the only time of the year when the lake was visible from the facility which sat perched on the top of the hill.
During my visits with Dorothy she had few answers to my questions.  She was a lady of few words.  Although Dorothy had early stages of dementia, I felt her silence was more her own choice of keeping to herself rather than a cognitive deficit.  A way to preserve her secrets.  She and her late husband had a private life.  With no children or close family, they were known for keeping a quiet and peaceful home.  Dorothy kept that peace in her solitude.
One weekend I was assigned to coordinate an activity for the residents.  I decided to take some of the residents to the patio and have a music activity playing Nat King Cole songs.  It was a beautiful morning.  The weather was comfortable.  The residents enjoyed snacks and conversation as the music started to play.  With some encouragement, Dorothy attended the group activity, probably because it was held outside.
Although everyone seemed to be enjoying the music, Dorothy’s eyes suddenly sparkled and a big smile blossomed on her face like never before.
I drew close to Dorothy, amazed at her transformation.
“Dorothy, do you like that song?” I softly asked her.
“Yes, it reminds me of my boyfriend” Dorothy said. “We were in high school”
Is this the Dorothy I know? I pondered.  My jaw dropped, and I smiled with excitement as I was anxious to hear more.
When Dorothy spoke, she opened her heart.  She told me about her high school sweetheart, their walks, dances, and holding hands.  That was the longest and most delightful conversation that I have had with Dorothy in her two years as a resident of the facility.  I spent about fifteen minutes listening to her captivating and charming memories.
My heart pounded as I listened to Dorothy recount her memories. What an honor it was to listen to her lovely recollections. Fond memories which were ignited by the music of Nat King Cole.
I looked at Dorothy’s beautiful smile again.
And I wished the music would never stop.

Can't let the music stop,
Can't let this feeling end,
Cause if I do it'll all be over,
I'll never see you again..."

I'm glad it touched Dorothy and that you were there to share with her...

funny that you'd make a post on music. tonight i listened to the most beautiful relaxing music. it was played on a lute. it was wonderful to listen to. very relaxing.

Music can evoke poignant, delightful memories! Our residents respond so well to music. I work in one of our 30 bed dementia units once a week doing a Hymn Sing. Residents who for a long time have said nothing, suddenly burst forth with memories when we sang the Sunday School song, JESUS LOVES ME. One woman was in tears. At first I was a little reluctant to sing what most would consider a children's song, but we do talk about having sung the song to our own children and grands. Now, it seems to have a place on the weekly requests!!

As pertains to music in the dining room at the long-term care centre, it was the nursing department who said that research shows residents find that background music during dining is far too distracting.

Something else I've noticed. We have some new staff who, when doing the exercise program, are using the music they like, instead of music the resident's would probably prefer. Think I'll address that one this week.

Oh this is such a tender, heart touching postDoris. I am so glad I discovered your blog.

Thank you for sharing this touching memory of Dorothy. I think of music as a portal to one's soul. Music can rekindle a memory, give a moment of inspiration and allow one to look forward to a brighter day.

I love to listen to music while I work and when I relax.

Thank you for sharing. Blessings.

That is such a touching story about the 'only' Universal language of MUSIC! As evident from your story, it can reach the far corners of someone's soul...

Thanks for sharing this!

I was asked yesterday: something you can't leave without? And my answer, without hesitation, was MUSIC. Indeed, music is the most wonderful thing. It's very "diverse" these days, but equally nice in every genre. I listen to music even while I'm sleeping! :o) It's been with me during the hard times, and during the most amazing moments of my life. When a certain song comes up, it triggers something within, and if it is happy moments, an inevitable transformation will be noticeable. You saw that with Dorothy :o)
have a blessing day!

Lovely post Doris, as always, poetic and touching. I spent the afternoon translating the titles of a CD by a Cuban musician from Spanish for the lovely wheel chair bound nun who organizes the music in the nursing home where my mother in law resides. Can there be that many coincidences in life? Thanks agin. P

I understand about being excited in someone sharing with you when they usually are quiet. I am the Senior Adult Co-Ordinator at my church. We're having Senior Adult day in November. I'm creating a slideshow to show them as a baby or child for that Sunday morning, plus I've asked for them to share something most people don't know about them. I was surprised by how many are participating, and think it's a great idea.

Doris ,
Your this post is also interesting and superb like older posts.
In fact music had much powers ----it can treat any illness faster than medicines.
Best wishes.
Hemant

This reminds me of a time when I was a teenager and played my violin at a nursing home where there were several elderly people whom I knew from church. Not one of the residents said a word before or after, but I know it affected them because music always does. The experience you've recounted here is so wonderful! My daughter and I listened to the video. Beautiful!! Thank you for sharing this story.

Music will speak to people when nothing else can.
Ann

I think music is a language unto itself; it sometimes speaks louder, and has more of an impact than just the spoken word.

Yeah...there it was... Music was like a magic.. It could suddenly change the person's character because of its magic.

Thanks for the very inspiring post, Doris!
I hope you always have a blessed day!
hugs,
nensa

What a beautiful story! Music truly is magic. It brought back a wonderful memory to Dorothy and created a new one with you as well.

I gave you an award over at my blog. Don't worry if you don't have time to do the whole award thing. Just know that I think highly of your blog.

What a beautiful post. Music often sparks wonderful memories for me.

Music can evoke such wonderful memories. There are so many songs that I can attach to special times of my life and special people.

Conversely music can be grating and even used as a weapon. I recall when the U.S. invaded Panama and bombarded Noriega with obnoxious (to him) music until he came out. I would hate to be tortured by loud Rap music.

When I was growing up there was so much music with beautiful melodies. I wonder about those in today's generation who list to the grating rap and speed metal and the like. Will they still relate to that music when they are older? If they can still hear that is.

Powerful story. Years ago in Cub Scouts I played Classical and Heavy Metal Rock for my group, observed their responses, and discussed it with the group. They were amazed at how differently they reacted to the different music styles.

Music is wonderful therapy. My mother-in-law suffered from Alzhiemers. Placing my face close beside hers I sang an Italian song she used to sing to my children when they were small. Her face lit up like your patient..she smiled and even spoke my name.
It workes on the long term memory..
what a blessing for both of you taht day. God bless. CML

Great post! And you have wonderful taste in music :)

Music is so calming to the soul. We had piped in music of the era most residents where and it made walking the halls so relaxing. Wonderful story.

Hi Doris,
What a beautiful story. I strongly believe music can be a healer. I listen to classical music when I'm writing or when I have writer's block. Music gets me inspired to write. In the past I've used music to comfort myself or when I feel lonely. I've read articles that even animals find it soothing when they're stressed. So, yes, music is a healer.
Thanks for sharing this post.

You have the most amazing way of writing. Your words are captivating and your stories are heart warming.

Hi Doris,
I enjoy your blogposts so I awarded you with "The Versatile Blogger" award.
Check out my blog for details ;)
Congrats!
Claudia
www.claudiadelbalso.blogsppot.com

Music can be inspirational; I also love listening to music at work.