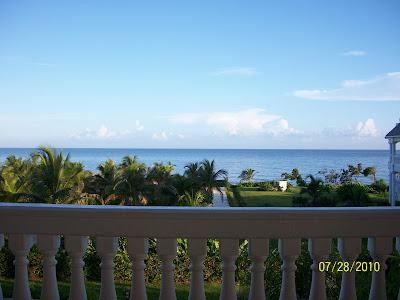 “Where is ‘bus 21?’”  my husband asked to a man in a blue uniform at the airport. His shirt displayed the logo of the company that would pick us up at Montego Bay airport, in Jamaica, to take us to the resort of our destination.  My husband had called prior to arrival and believed he was told to find “bus 21.”
“Bus 21?  No, I think you are looking for Desk 21. Please go back inside, turn to your right and you’ll see it. Make sure to get your voucher,” he instructed us.
We turned around. I could sense my husband’s frustration. But I actually thought the misunderstanding was rather humorous.
“Bus 21, desk 21... bus, desk...” I murmured. Then I started giggling, after a glare from my husband.
“They speak too fast,” my husband exclaimed --his logical explanation. And we both laughed.
That was the beginning of an exciting, fun, and interesting trip for my husband and I, our first time to Jamaica. It was part vacation, but --more importantly-- the place to celebrate our second wedding anniversary.
Once in the shuttle bus, and soon after leaving the airport, we noticed the driver turned left at a roundabout  --whereas we expect him to turn right, as was normal for us.
Are we driving into oncoming traffic? I wondered, feeling panicky.
But the driver quickly announced: “Right side is suicide here in Jamaica,”  laughing at a handful of naive tourists. Then we realized that you’re supposed to drive on the left side of the road. British influence, I recalled. 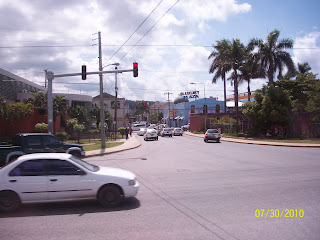 As we were heading to our resort, the driver pointed out some places of interest: a stadium where there was an important Reggae event a few nights before, a place for riding horses, hotels and resorts recently built, a fishing village, and a food store where famous Jamaican rum cakes could be savored.
But as the driver was playing tourist guide, my wandering eye was targeting other areas of interest.
Areas of my own interest.
I glanced at people on the streets. I observed many children, poorly groomed, some of them bare-footed, standing at the traffic intersections, selling guineps, a native fruit of the American tropics. Do those children attend school? Are they working only during the summer months, until the new school-year begins? Or do they have to  work and attend school? -- Too many questions, I criticized myself. 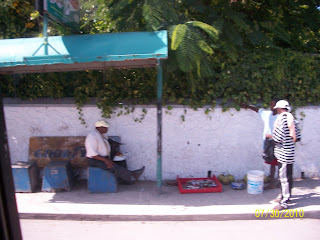 That happens when you are a social worker. I sighed.
I realized that my husband was also glancing at the street scenes.
“Informal economy”, I commented.
“Just like in South America”, my husband said.
“Just like in South America, or Africa, or any third world country,” I whispered.
My husband remained quiet. I sensed he had no desires to discuss socio-political or economical problems. And without any further comment, we focused back on our vacation.
We arrived at our resort.  We passed through a security gage to a luxurious place.
Majestic, I thought.  The architecture was astonishing. The ocean view was gorgeous. The aristocratic setting was beyond what the advertisements could capture in a picture.
“Welcome!” the front desk girl with a sparkly smile chimed as we approached.
Welcome to paradise, I mused, with obvious excitement. 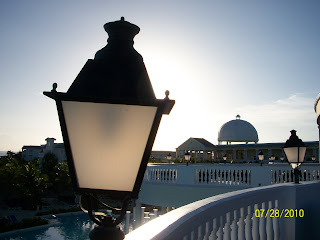 We truly enjoyed all the amenities, the beach, food and fun activities. I particularly got a kick out of interaction with the staff. Most of them were men and women in their early twenties, may I have taken a good guess. They worked diligently, yet apparently almost stress-free. I believe the Reggae music --which always played in the background-- was a spirit booster for them. And they always had a smile on their faces.
Genuine smiles.
I presumed they were pleased at having a job with more benefits than the average population. Or perhaps having a job was just enough to feel lucky.
I knew little about Jamaica upon my arrival. But later I found myself indulged in learning its history. It was amazing to learn that Jamaica was a young nation. It wasn’t until 1962 that Jamaica claimed her independence from British oppression.
As a colony of Spain from 1494 to1655, and a British colony from 1655 to 1962, I could understand the challenges of such transitions, and how it may have directed the course of its economy and society. An interesting note I came across about Jamaica summed up the country well:
“For centuries, Jamaica has welcomed settlers from all around the world. This small island has played host to the Amerindians who discovered it, to Europeans who fought to own it, to Africans forced to call it home, and to Asians, Indians and Middle Easterners searching for a better life. Each group carried with it a story and tradition, throwing everything into Jamaica's melting pot. After centuries of brewing, all have blended together to give the island its rich history and heritage”   (http://www.visitjamaica.com/about-jamaica/history.aspx)
Rich history, rich culture. I thought about this while shopping for souvenirs. 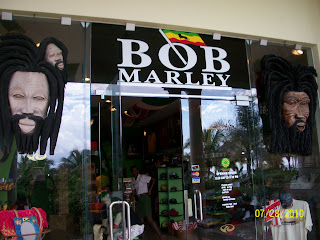 I observed meaningful crafts, and the Jamaican spirit and pride reflected on symbols, slang sayings, and expressions. One particular expression that caught my attention was: “Irie, Mon”. It was printed on everything from t-shirts, key holders, and mugs, to magnets. Intrigued, I asked one of the girls in the gift shop what it meant.
“It means feeling good,” she explained, flashing a big smile.
As our vacation drew near to its end, I glanced at the ocean one more time before leaving the resort. The water was blue and clear, the ocean was calm. 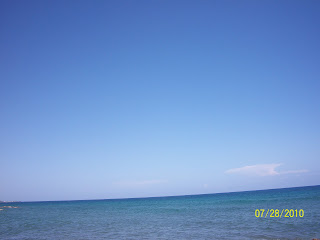 And so was my mind and spirit.
I thanked God for the beauty of that island and its people, for the peace and harmony my husband and I experienced during our stay. I thanked God for the leisure the resort offered, and particularly, for “the retreat” --as I named a rustic area on the beach, away from the crowd and noise-- where we spent a good deal of time reading, musing, or simply listening to the sounds of the waves embracing the rocks. It became our favorite spot. Our sanctuary. 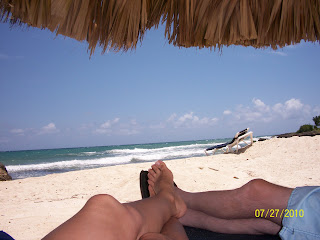 A graceful breeze usually swirled our bodies while we were immersed in our reading, and writing. I had my notepad and pen with me. Back to basics, back to nature. Life is irie, mon!
Posted by Hold my hand: a social worker's blog at 8:51 PM

Looks like you had a wonderful 2nd anniversary with a blissful time at the beach; your paradise for the moment... Love the photo with your feet! Two in one; IRIE MON!

I would love to visit Jamaica one day. My son's father is Jamaican and I think my son should see where his roots are. I think though he gets his uptightness from me, I wish he was more IRIE MON! WOnderful photos.

Great photos and the holiday sounds idyllic. I have never been to Jamaica. My daughter and one of my son's has though. They love it.
Ann
Inkpots n' Quills

Happy 2nd anniversary. Love the last photo, it's beautiful! Happy Monday! I am following too. Thanks!

Sounds like you had a wonderful anniversary, Doris. Your pictures are excellent, but that last one is priceless. Anyone who looks at it can imagine herself holding the camera.

What a lovely way to spend a second anniversary. Pics are just lovely, as are your musings. Nice to "meet" you Doris. Thanks for stopping by my blog - and for purchasing my memoir.
Karen

Well first let me say thank you for visiting La Bella Vie and your nice comment. Its always nice meeting new people.
I love this post. The first part was very apropos; my husband and i went to the Caribbean a few years ago and the first thing we noticed was the extreme poverty.
But having said that, the people are amazing and the resort lovely!
Glad you are now following, and I'm doing the same on you blog.
Look forward to chatting!
terry

I've never been to Jamaica before. I might want to visit there someday. I love the water, and in the Bahamas I noticed that the workers there were really warm and friendly too. They were all ages though. Lots of shopping to do there. I hope that you feel refreshed! By the way, that's for reading my blog!

Happy 2nd Anniversary!
How lucky to be able to go there--I've always wanted to visit that island & home of Bob Marley!

I also enjoyed your pictures.

Hey
I could tell from your pictures that you were at the Grand Palladium! My husband and I are going back for our 3rd time. We love it there!!!!!!!!