My encounter with Andy 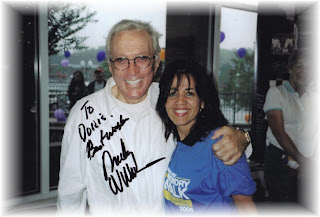 “Who is he?” I asked, pointing toward a man waiting for the start of the Memory Walk.  Next to him was a woman who wanted her picture taken with him. Rob looked at me, doubting.  “You don’t know who he is?” Rob was one of coordinators of the event, and a good friend of mine.
“No, I don’t know him,” I stated.
“That’s Andy Williams!”
My eyes opened widely, and my jaw dropped.
“Andy Williams?”
“Yes, Andy Williams!”
I couldn’t hide my surprise. I was a big fan of Andy Williams. I loved his music. “Moon River” -- what a romantic song--  “Music to Watch The Girls Go By” --such a cheerful song, and one of my favorites ever.  I could hear his songs swirling in my head as I looked at him, out of his element and in casual shorts, preparing to walk.
I had attended a couple of his shows, and I had always hoped to shake his hand. Unfortunately, unlike many other celebrities in Branson, Missouri, Mr. Williams
doesn’t normally come down from the stage to greet his audience.
There I was, standing about 20 feet from him. He looked older and more slender than on his bigger-than-life pictures on billboards and in his brochures. But I could care less about his looks. His voice and talent was all I cared about.
“Rob, I have to have a picture with him, but I didn’t bring my camera.” I was desperate. I felt just like a teenager in a music concert for first time. I had to improvise something fast before my chance would vanish and he would walk away, as he was supposed to in the Alzheimer's walk.
“I’ll  take the picture with my camera” Rob offered.  What a relief to hear. I accepted.
We rushed to get close to Andy. “May I take a picture with you?” I asked. “Sure!” he answered, with a smile. He put his arm around my shoulders, and held me close to him. I could feel his energy, his strength.
What an emotional moment.
I thanked him, and walked away, as I didn’t want him to feel smothered. Andy was there to take part of the annual Memory Walk, promoted by the Alzheimer’s Association. I assumed he wanted to enjoy the walk rather that being chased by fans.
A week later, Rob sent me the picture. I was thrilled. But another idea sparked in my mind. I mailed the picture to Andy’s theater with a note, asking if he would please sign it. He did, and returned it to me, signed: “To Doris. Best wishes.”
I kept the picture as one of the most precious mementos in my life. I found a special place in my office to display it. I showed no humbleness when visitors and clients would ask: “Is that Andy Williams?” “Yes!”, I would answer with a grin in my face, and would proceed to tell them about my unexpected meeting with Andy at the 2006 Memory Walk. As anyone could guess, I have enjoyed every time someone says, “Wow, that’s neat!” or exclaims,  “That’s cool!”.
I followed Andy’s celebrity news closely. I learned that Andy was publishing his memoirs. The excitement embraced me when I heard that he was having a book signing event.
This time I am going be prepared, I mused.
I had my camera with video recorder ready. Claire -my stepdaughter- was coming with me, and I instructed her on every possible detail for picture taking and video recording. We arrived early to the store where the event was to take place. I was the fifth person in line.
My heart pounded when I heard that Andy had arrived.
I looked at Andy with a keen eye. I noticed he had visibly aged. He had lost weight. He seemed unmotivated. His face wore a flat, unemotional expression. 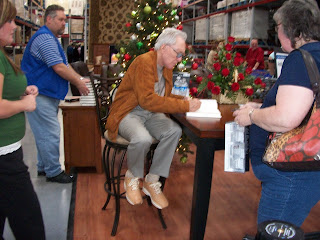 I sensed that he was not the Andy I had met four years back.
When it was my turn, he signed my book, and quickly looked for the next person in line. Andy’s staff asked me to move on. As in a disobedient attitude, I turned back to Andy and asked him if he could write “To Doris” on the book. Andy looked at me with clear annoyance. “I’m just signing my name,” he said, dismissing me. 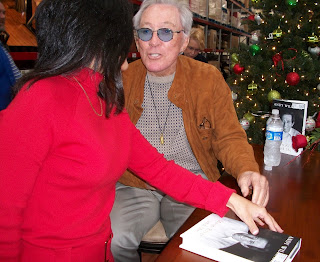 I was shocked. Certainly disappointed.


I looked at Claire and waited for her to take a picture. I nervously smiled. Just for the picture. 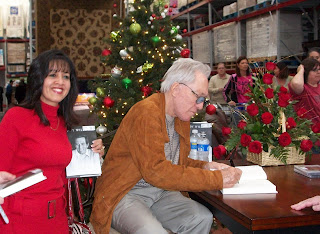 And we walked away.
As we were leaving, I felt like my pride dragged on the floor, being torn in pieces along the shiny tiles. No one would bother to clean up the remains.
When I got home, I told my husband, family and friends about my unpleasant experience.  The next day, I removed Andy’s picture from my office. I was no longer his fan. I didn't appreciate Andy’s behavior. I cared nothing about his book.
Writers ought to be excited about signing their books.
I couldn’t believe that the first book signing I had attended would turn into a sour memory.
Andy was not a writer after all, I  thought, consoling myself.
Months later, I found myself musing about Andy and the book signing. I sat deep in thought and dispassionate consideration of the event. I started to think of Andy as a person rather than a celebrity.


I recalled that Andy was in his 80’s. I presumed he had health challenges to face. Aging can be a burden. He might have had a lot of stress at that time. Being a celebrity and a businessman would obviously impart that worry, and pressure would take the better of him on some days. Who knows what family issues may have arisen that week, or that day. Andy may have been lonely or depressed, even if surrounded by many people.
After all, we, the fans, are all but strangers to him.
My heart started to feel empathetic with whatever his life challenges may have been that day, or may be by now. I have come to realize that I had the luck of seeing him face to face twice in my life. My perception of his personality can’t deny his well honed talents. I still love his music. I certainly admire and respect him.
I searched until I found the picture I had removed from my office. I dusted it off.
The dust of my own arrogance, I compared.
I brought the picture back to my office, and with it, the gleeful feelings when I first met Andy.  The happy, philanthropic and vibrant Andy.  The living legend.

Posted by Hold my hand: a social worker's blog at 9:38 PM

You are generous and warm hearted. Sure that incident wasn't nice at all. I would have felt the same as you did. But you've chosen to look at other brighter thoughts. So, Andy, you still got a fan!

Thank you for the connection.

That was so sad in a strange kind of way. Maybe he was just busy that day, but I would have felt as deflated as you.
He certainly looks a lot older and thinner, and maybe his memory wasn't what it was.....but he can still make your heart flutter!

New follower. Thank you for returning the favour!

BEAUTIFUL!!! What an awesome life lesson!

What a beautiful post. You show forgiveness, self-awareness, understanding, and the ability to look at an issue from more than one side. If we could all have that skill.

((Hugs)) Doris... I know how you feel. I am so happy and proud that you began to love 'your enemy'. You are right, the older a person gets, the less tolerant of any thing they are.

It takes a whole lot of courage to do what you did, and to still admire him after that one time . . .

I think we can always learn from others' mistakes.

So, when we are in our 80s signing books, we'll make sure we smile. Or maybe we won't realize how we're behaving because of health issues? Ugh! I hope I can have full control and awareness of charity even at that age....

Thank you for following my blog and your lovely comment! <3

This was such a touching story I couldn't help but sigh and say "awww" at the end :)
"The dust of my own arrogance" - what a beautiful revelation. I'm so glad you turned a not-so-good experience into something positive. Thank you very very much for stopping by my little place! love,

I love your blog! Very refreshing, and interesting.

This was beautiful! I too have met some aging personalities while at CBA -- and they weren't what I expected. unfortunately, we change as we age and we need to remeber that about all those around us. Thank you!

Oh, I struggle with this. If I feel slighted or wronged, I have a hard time going back, rethinking things, and truly trying to see things from another's point of view.

What an amazing life lesson! Thank you for sharing. I'm a fan now!

You have such a rare gift of discovering inner beauty! Fame and outer beauty we do 'wear' only for such a short time! When it fades away, the true blessing in life is to encounter loved ones and friends that look beyond the flaws and shortcomings and still love us as a person! May God bless you!

In the end you have such a compassionate response to a person, who happens to be a celebrity. He was probably very tired that day at the book signing. When you saw him at the walk, he might have seen you as a comrad in a similar journey. At the signing, he was back in his celebrity role. The video was great, too.

What an amazing experience, and you've handled it beautifully!

Just wanted to say how much I liked your blog. I'm a new author and i'm in the process of writing my first book. It's been a journey. I am now a follower here and will be back for updates.

Wonderful story. There may be more going on with his aging brain than people know; it could be that his brain does not engage any more -- and that is sad for him, more even than for others. You are right; for ourselves, we need to find the sunshine behind the clouds.

Aw, I love your compassion towards him and understanding of what seems to be a really rude moment of time. It's so true that it could just be the effect of aging or stress in his own life, and it's great that you were able to see past that.

I can understand your disappointment. Celebrities have a job to do and that is to put all their issues aside for their fans. That is who put them where they are, if they don't like it,, then they should not be on the spot light.
I know...I'm a little heartless