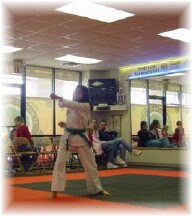 “Kick the board,” my instructor demanded. A side kick. What I had seen in Kung Fu movies was now my real life reality. An exciting, yet frightening reality.
“You can do it!”, my instructor, the Sensei shouted. I heard encouragement in his voice, but my own inner voice questioned, “What if I hurt my foot?” I would be embarrassed if I failed. There were too many people around, watching me. Their watchful eyes made me worry more about my performance, than my own personal success in executing the technique.
I took a deep breath, and echoed the Sensei’s words in my mind: “You can do it!” I kicked the board, snapping it crisply. I felt empowered by hearing the snap and the crack of the board yielding to my bear foot.
The exercise was part of my Tae Kwon Do practice a few years ago. I was testing for my green belt. The broken board on the floor was testament that I had passed. I was proud of myself. In my hesitation to risk splintering my foot, and hearing the Sensei’s encouragement,  I learned that my potential is greater than what I would have normally believed. I believe we all often under estimate our capacities and strengths.
As a young girl, I wasn’t very motivated in participating in physical activities and cared less about engaging in competitive sports. I occasionally played basketball, but I was usually afraid of getting hurt.
Training in martial arts revealed to me how wrong I was.
I practiced Judo while in college. I did so only because a sport unit was a degree
requirement. I elected a martial art course more out of curiosity than for any serious
commitment or interest.
As a new Judoka I was shy, fearful. Again, I was afraid of getting hurt.
My first surprise was to learn that Judo means “gentle way” or “flexible way”
Who would associate martial arts with gentleness?  That wasn’t what I had seen in the movies, or what I had heard from people.
My Sensei taught his students a very interesting concept: A Martial Art is not just a sport; it is also a philosophy.  Successfully practicing a martial art demands self-discipline and respect for others. Advancement in this practice requires self-confidence and self-control. Balance of the body and mind.  After that comes the learning of techniques.
There was one particular discovery in my martial arts journey.  It happened when practicing Judo. It seems that students tend to favor one side of their body than the other, and that side is typically associated whether they are right or left-handed. In fact, most of the students are right-handed. I am right-handed but my Sensei noticed a strength that only an instructor could identify: he saw that the left side of my body, which I’d considered my “weak side”, was actually as powerful as my right side.  And I became quite successful with left-handed techniques.
“A good Judoka will have both right and left-handed throws in their arsenal,” another Sensei had said.
My martial arts experience has been very useful in my personal life. I am no longer
afraid of getting hurt. I don’t want to be hurt, but I am not hesitant to strive for
triumphs merely due to fear of being hurt.
I’ve also learned that those we believed are our “weaknesses” may be only misconceptions, and can actually turn into strengths.
Now, when it comes to challenges, I like to remember:
I can break the board.
I can use my left side.
Posted by Hold my hand: a social worker's blog at 11:01 PM

Great post! I also was not into sports as a kid, due to twin fears of getting hurt and failing. But I started playing sports (varsity sports, amazingly) in college and learned so much from that experience. It's neat to read about your experiences coming to a sport (and philosophy!) in Judo.

I learned something new today! :) Didn't know the meaning of Judo! Thanks for sharing your thoughts!

And thanks for visiting my blog! :)

Hi Doris,
Enjoyed your post as always.
Thank you for saring.
Blessings.

Yes, we have to rise to challenges and know that we can:) Thanks for this wonderful post.

That's a great story about building strength. I felt something similar when I joined a weight lifting class at the Y. Now, I look around and I'm one of the strongest women in the room. Go girl power!

Wow; that is sooo cool that you do this!!! I love this story and the way you shared your experience :)

this is so right on...what I thought were weaknesses has really made me strong. Great analogy with the kung fu.

You sound so much like me as a child. I hated to get hurt, didn't do sports but never thought of training this way. My daughter did it a few years back-- I should have done it with her now that you explain it this way. Great reminder to us!

Great post. I started purposely doing things that I was fearful of because I realzed I had more fear than courage. When you talked about kicking with your left side I thought about balance.
It is important to be flexible and versital in life, isn't it? To take defensive and offensive positions no matter what hits our life.